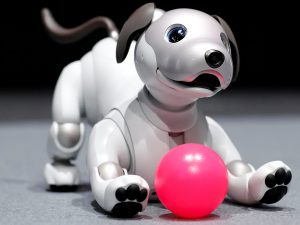 Artificial intelligence has come a long way. Ever since John McCarthy coined the term in 1955, we have made astronomical leaps in this field. We often assume that artificial intelligence is this insanely futuristic robot that will be built in the distant future; however, this isn’t the case. AI is already everywhere; voice assistants like Siri or Alexa or Tesla’s self-driving car are common, well-known examples of AI, but there are many overlooked industries like the pet industry.

Sony is an electronics company that provides products that range from earphones, gaming systems, television sets, and even pets. Sony recently released AIBO, a series of robotic pets. It literally stands for Artificial Intelligence roBOt. It was released in 1999 but ended production in 2006. In 2018, Sony returned with a much more advanced version of AIBO. It looked more similar to a dog and was able to act exactly like one. It has two cameras, one on the nose and another on the tail, to scan its surroundings. It has a sensor on its paws to know where it is going. Behind its LED eyes, there are infrared scanners to sense the toys that come with the robot. They can surprisingly show physical signs of body-temperature changes and attain a wide variety of facial expressions to mimic a regular dog.

AIBO can be easily programmable by the user through a simple coding app. Its personality can be selected from one of Sony’s present choices. AIBO has the ability to understand human speech and perform tricks, just like any dog. Aibo then associates the actions with the command and does not need to be programmed every time. He also is able to recognize a face the more he sees it! The point is that the interaction determines their ability to express needs and emotions, and more importantly to learn and mature.

AIBO may have been made for entertainment and a way to modernize nostalgic toys, they have been used to make technological innovations. In 1994, Dr.  Toshitada Doi, the original creator, worked alongside AI expert Masahiro Fujita to reach innovations. Applying state-of-the-art technology for entertainment is already hard enough, but AIBO needed to even more complex and unpredictable so people would be interested in taking care of them. By 2010, the bot responded to over 100 commands and understood language tones. The AIBOLife software is what gives them the ability to develop their personality and learn from its environment.